Stranger Things 2 is the much anticipated sequel to the exciting, worldwide phenomenon Stranger Things. Continuing the trend of 80’s references and creepy monsters stalking Hawkins, does this season hold up to its predecessor? Is it even better than Season 1? To help answer these questions, Michelle is joining me for a review of each episode, and at the end we’ll score Season 2 as a whole. Here we go!

Warning: There will be A LOT of spoilers, so if you haven’t seen the show yet, stop here!

Michelle: Episode 1 is a strong opener for the season. It pulls the viewer in right away, catching us up on what the characters have been up to for almost a year. We get a lot of the same: Mike and friends are big nerds, fighting for the top score on their favorite video games at the local arcade. Hopper’s back, protecting and serving the town of Hawkins. Nancy and Steve are still together, though rocky as ever. We also get a lot of new: there’s a new kid in town, and she’s a redheaded nerd who plays videogames (whaaaaaat?). Joyce has a new boyfriend named Bob, played by the original Goonie himself, Sean Astin. And why are all the dang crops dying? Overall, the balance between the familiar and the unknown worked well for me here. I found my interest piqued and immediately re-attached to the characters I got to know in season 1, with a cautious optimism for what lay ahead.

This episode also answers a lot of frustrations and questions I had about relationships between characters and the fallout of everything that happened in season 1. I’m talking about Nancy and her strange ambivalence only months later about her best friend Barb dying in the Upside Down. I’m talking Nancy and Steve’s shallow relationship and lack of chemistry being shoved under the rug in favor of a cutesy ending, leaving Jonathan shut out and me shouting into the void. I’m talking the psychological effects on Will after surviving the Upside Down. Episode 1 tackled a lot of my character development concerns post-season 1 and basically let me know that I had nothing to worry about and that they were in good hands.

My one complaint is that episode 1 raised my expectations about how Kali would be used in later episodes. Once I got to episode 7 (more on that later), an entire episode devoted to Kali, I couldn’t help but feel like the teaser thrown in at the beginning of episode 1 was a bit disingenuous and a bit of a cop out. Based on that clip alone, I really thought Kali would have been much more instrumental and consequential in this season, and she just wasn’t. Not great payoff, in my opinion.

Michaela: When I first watched episode 1 and saw the teaser for Kali and her team of misfits, I was pretty excited. “Wow, what an ingenious way to incorporate the world-building!” But then I immediately forgot about it for the next six episodes (which we’ll get to later) and was sucked into the stories of our main, lovable nerds. This first episode does a great job of balancing the familiar and the new, introducing new characters and revisiting important themes and ideas from the first season to catch us up to speed while also setting the stage for the rest of the season. Right away, so many unresolved feelings are addressed, from Nancy’s grief and guilt over Barbara’s death to Will’s trauma from his time in the Upside Down, MADMAX immediately expands on these emotions and fleshes out the characters properly, setting them up for some satisfying character arcs later on.

I give MADMAX 4 Eggo waffles out of 5 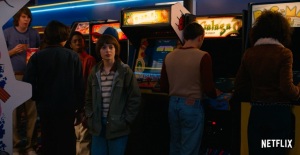 Michelle: While the first episode gets us up to speed on our beloved heroes from season 1, this episode is the one that made me say, “Yes! I am here for season 2.” Episode 2 really explored the subtle shift in Mike’s role between seasons 1 and 2. While he is still undeniably the “leader” of the gang of boys, season 2 offers him a somewhat less flashy, more comfortable protector role for Will. Personally, I felt like this was a good decision. It allows the other three boys to shine a bit more this season, and Mike is still given a lot of great scenes to work with. I’m just gonna say it: Mike and Will are adorable. The deep bond and friendship they share is absolutely precious. I know Dustin and Lucas claim that they’re all best friends, but it’s pretty clear that when push comes to shove (and when Will gets pushed and shoved by bullies), it’s Mike who is there to protect him, sling an arm around him, and get Zombie Boy back on his feet. I have to say that the dynamic between these boys is easily my favorite in season 2, and I would be interested in seeing if the Duffer Brothers intend to pursue this further. I always had a bit of a niggling feeling that Will was coded queer in season 1, and I’m wondering if they’re alluding to that this season as well. I’m not necessarily expecting this to be addressed, but it’s a thought that crossed my mind more than once, especially given how Mike and Will’s relationship develops over season 2.

This episode also re-introduces us to the lovely Eleven, being cared for in secret by Hopper. Their relationship is my second favorite of season 2, and the Duffer Brothers approach the complexity of their father-daughter kinda sorta relationship with a lot of care. Every scene with the two of them is beautifully acted and emotionally resonant. Bravo to the actors and to the writers for nailing their dynamic.

Michaela: After a season of Will being missing and receiving little to no character development or backstory, seeing his dynamic expanded with the other boys, particularly Mike, is so well done and much appreciated. I honestly hope that the Duffer Brothers are intentionally writing Will as queer, because it can’t be a coincidence that he was the only one to be bullied for being a “fairy” and gay in season 1 and that he only calls for Mike when he’s flashing back to the Upside Down. That would be some genius long-term planning, and needless to say, I am a shameless fan of these two (Byler for life!), and I hope it’s explored more in later seasons.

I also really enjoy the scenes with Hopper and Eleven. The relationship explored between these two characters is deep and meaningful, and rather than feeling like the typical, cliche story of the rebellious daughter and her strict father, the emotions of these characters are far more nuanced to create a unique dynamic. I love their relationship so much to the point that when Eleven goes rogue (I’ll get to that later), I was probably more disappointed than I should have been.

I give Trick or Treat, Freak 4 Ghostbuster costumes out of 5

Michelle: This is the catalyst episode. The last two episodes were content with establishing the status quo and introducing some new elements, but episode 3 shakes everything up at its core. Unfortunately, it takes the entire episode to get to that “oh shit” moment, and as a result, this episode is a bit lackluster for me. We do get Nancy and Steve finally breaking it off, which I honestly wasn’t expecting; I thought they’d milk that “will they or won’t they” again all season long. But they cut right to the chase, and I appreciate that about the Duffer Brothers. They don’t really beat around the bush. It’s refreshing.

The budding threat of Dustin’s new baby demogorgon pollywog friend D’Artagnan is interesting and amusing at times, but just doesn’t hold my interest like literally everything else going on in the season. And if I’m being honest, I was least impressed with Dustin’s character arc this season until he and Steve team up (more on that later). The kid is a fantastic actor, and I wish they’d give him a little more to work with.

But the moment when Will tries to confront the Mind Flayer in his now memories and is more or less possessed is absolutely horrifying and harrowing, and from then on you know this show means business once again. Part of me really didn’t want that to happen to Will, partly because he’s my favorite nerd boy and I think he needs a nice long nap and no more supernatural trauma, but mostly because I was enjoying seeing Will as a character separate from the Upside Down. However, I realize that his connection to the Upside Down makes him the perfect (only?) candidate for the Mind Flayer to infiltrate, so I forgive the Duffer Brothers this great sin. But maybe let him live his best life in season 3? Maybe? 🙂

Michaela: The Pollywog has some memorable moments sprinkled throughout and establishes some new plot threads, like Dustin’s discovery of Dart. It’s cute and all, but it makes Dustin’s naivete seem more silly than genuine because it’s so obviously from the Upside Down. Fortunately, Dustin will receive the development he deserves, but that doesn’t come until later. In the meantime, the episode doesn’t do much else, until the very end with Will being overtaken by the Mind Flayer. It’s an absolutely terrifying scene and really makes me hope that he and his family will have some peace in later seasons. Fortunately, it doesn’t render Will completely useless or out of the picture and instead cements his role in the story as a valuable member of the team. His possession also creates some really interesting moments later on. All in all, this really is the best decision the Duffer Brothers could have made story-wise, even if it is at the cost of this poor boy’s happiness.

I give The Pollywog 3.5 bits of nougat out of 5

Part 2 and 3 of our episode-by-episode reviews of Stranger Things 2 will be coming soon!