Over the summer, some of us members of Objection Network have participated in a couple of group puzzle solving activities called Escape the Room and Real Escape Game. While the goals are similar of having to “escape” there are still quite a few differences into how the games are ran and flow. Having experienced both, I wanted to take the time to compare the two in order to decide which one I’d recommend more.

Our first venture was back in May, and was the traditional Escape The Room theme. Trapped in a room decked out to resemble the interior of a pirate ships, we played the roles of captured pirates looking for treasure before a massive storm sinks the ship. To find it, we needed to solve various pieces of the puzzle to escape the room in time with the riches. We had an hour to do this, and our finishing time was pretty good, with 19:15 minutes left by the time we finished the campaign.

No spoilers here, and while I enjoyed the narrative drama of needing to physically escape the room, there were also moments during the hour when I felt as though I was contributing very little to the puzzle solving, kind of standing off to the side and just observing without truly being immersed. But the amount of detail that went in to create an authentic looking room in a pirate ship was really quite incredible, with chests strewn about and various jars filled with sand and goodness knows what else. A cute touch was that we got to select a stylized pirate coin (plastic of course) of our choice to bring home as a small souvenir, and that was nice.

The next campaign we participated in was over this past weekend and was a little different in structure. Final Fantasy XIV‘s Real Escape Game was much bigger-there were 10 groups of people besides our own all competing to complete the puzzles and escape within the hour. There were two areas: one designated for the groups to solve puzzles at their tables, and another featuring shops and mazes for the teams to visit after solving puzzles, where they would collect new clues and items to continue the quest. The budget for this campaign felt bigger as a result, with exclusively animated cutscenes using the same graphics from Final Fantasy XIV to tell an exclusive narrative, items to engage the players and enhance the puzzles, plus additional staff members to provide hints and roleplay.

The only real downside was that the venue this Real Escape Game took place in an art gallery, and while it was big, it wasn’t really decorated to fit in with the game. It still clearly looked like the interior of a building, and since the rest of the team put time into customizing the experience of solving the puzzles, having some extra visual flair to accompany it would have been nice. The class lanyards were nice, but again, having hats for everyone to wear based on all of the classes would have been nice to immerse the players even more.

I’m not about to go into spoilers about the types of puzzles or the answers were, but our team was much more focused this time in that we all had a role to play. Every player had a key role in completing the tasks to escape in time, making the game smartly designed and make everyone feel involved. Most of the puzzles were intuitive and fun, but there were a couple that were a little difficult to solve mostly due to some of the staff arguably taking the roleplaying a little too far. Irregardless the experience was super fun and memorable.

We rocked the game, and in addition to being one of the four groups to finish the game in time, we were also the first to do so (but not by a ton, there were only had ten minutes left by the time we finished!). After the game concluded, the solutions were discussed for the groups that were unable to finish in time, and a raffle for an exclusive poster was handed out as well, which was really cool. We briefly looked at the merchandise table too, but since there weren’t any T-shirts available, we took our leave pretty quickly. 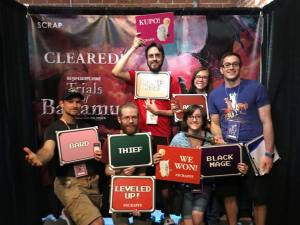 Both games were a blast, but in terms of getting the most for our money, Final Fantasy XIV‘s Real Escape Game is the winner. Between the large venue, needing to run back and forth between the different areas, and being there for over an hour to do the game really made the drive and price of tickets worth it. In addition, the clever game design and puzzles forcing the entire team to engage and have moments to shine was very well done. Crimson Storm was fun, and definitely created for fans who want the excitement of escaping a locked room, and I would do more Escape the Room and Real Escape Game campaigns in the future if given the chance.

Crimson Storm: 3.5 raving pirates out of 5

Trials of Bahamut: 4.5 fluttering Mogs out of 5