Warning: this review might spiral into whooping/warbling noises and small, high pitched chirps.

The Orbiting Human Circus (of the Air) is a whimsical, magic realism podcast about a young janitor named Julian. While he mops the floors and scrubs the iron lattice-work of the famed Eiffel Tower, he desperately daydreams of being on the radio. It just so happens that a peculiar radio variety show–the Oribiting Human Circus (of the Air)–broadcasts from a ballroom at the top of the Eiffel Tower. Naturally, Julian is drawn to the show like a moth to flame; he can’t help but interrupt the broadcasts when he inevitably tries to listen in from the rafters or occasionally stumbles onto the show itself. After all, he tends to kinda sorta ruin everything. Over time, the podcast opens a window into Julian’s experiences, his relationships, his history, and some secrets about the radio show he loves.

The Orbiting Human Circus is written and created by the one and only Julian Koster. That name might not ring a bell for you, but it’s got one hell of a “pedigree” backing it. Let me take you on a very small tour. 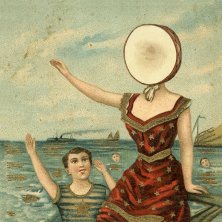 First of all, Julian Koster is a member of Neutral Milk Hotel, an acclaimed and fiercely beloved band formed in the ’90s and headed by the masterful and mysterious Jeff Mangum. You might be familiar with the cover of their iconic record In the Aeroplane Over the Sea, pictured on the left. If you don’t believe just how much of a critical darling this album is, check out an article written by Paste Magazine just a week ago that puts ITAOTS at #2 as best folk indie record of all time. Personally, I think it’s the most emotionally affecting album I’ve ever heard. But I understand if “fuzz folk” featuring singing saws, a vibrant horn section, and a yowling lead singer whose stream-of-conscious narratives about two headed boys and Anne Frank isn’t your thing. It just happens to be very, very much my kind of thing.

Anyway, Julian Koster is known for more than his influential work with Neutral Milk Hotel. He has his own band, an experimental folksy/performance art group called the Music Tapes, and three gorgeous records out under the name. (As an aside, the Music Tapes are featured on the Orbiting Human Circus as well, which makes for a fantastic soundtrack.) Julian is a longtime member of Elephant 6, a music collective that formed in the ’90s in Athens, GA. He has contributed to a generous handful of Elephant 6 projects over the years; it seems like no matter where you look in the prolific catalog of the Collective’s discography, Julian’s name surfaces somewhere in the liner notes or in the acknowledgements. He is also known for his quirky caroling tours–stopping at fans’ houses to encourage saws to sing Christmas songs (one does not play the singing saw, but encourages and pets the saw to sing on its own)–and traveling around with a 7-foot tall metronome, a contraption called the “Clapping Hands,” and a TV named Static, all of whom are his friends and part of his band. And now he’s making his name shine all the brighter with a remarkable podcast backed by NPR and Night Vale Presents.

While the podcast’s central character Julian the Janitor is (debatably) fictional, there’s no doubt that autobiographical experiences and traits of Julian Koster himself helped shape the Janitor as we know him today. They’re both shy dreamers who genuinely believe in magic and the imaginary. Neither of them are straight. They both have a deep connection with polar bears that stems from their great grandfathers. Recognizing the places where fiction and nonfiction cross is fascinating and rewarding for those willing to squint. But on his own, Julian the Janitor is legitimately the sweetest cinnamon roll character I’ve ever come across in any medium. Ever. He’s genuine, sweet, selfless. He possesses a pure, childlike sense of wonder. He’s also a fantastic point of view character through which we learn about the world around him. Furthermore, the remaining characters that grace the podcast are interesting and complex: the host of the Orbiting Human Circus, John Cameron, the paradigm of a showman who will do anything to keep his radio show on the air; Leticia Saltier (possibly named after Laeticia Sadier of Stereolab, non?), the Orbiting Human Circus’s chief stagehand and a total badass; and the dopey but well-intentioned stagehands Jacques, Pierre, and Francois. They’re such a fun, diverse cast, and the voice talent is delightful. I fell in love with this cast of characters, y’all. They’re a joy to listen to so far, and I can’t wait to learn more about all of them.

Structurally and narratively, the Orbiting Human Circus podcast is probably nothing like anything you’ve heard. Though it’s produced by the Welcome to Night Vale folks, you’re doing yourself a disservice by comparing the two podcasts too closely. I’d argue that the Orbiting Human Circus is an avant garde piece of art–it actively redefines our understanding of what the podcasting medium is capable of through its storytelling techniques and structure. Julian’s story is told by an inner “narrator” who isn’t actually relegated just to narrating; he also interacts and engages with the Janitor. But we also get small glimpses into the lives of the cast and crew of the Orbiting Human Circus radio show absent of Julian. Then there’s the actual radio show itself, and we as the listeners get to hear some of the feature presentations and acts that grace the airwaves. And finally, there’s us: the listener. Yes, even we play an important, meta role in the podcast. The Orbiting Human circus podcast is a variety show about a variety show, and within that, there are layers upon layers upon layers of narrative. I’m not going to pretend it’s not a lot. It is. But it’s also somehow extremely accessible too. I promise you that it is absolutely worth it if you allow yourself to open up and be immersed.

I will say that with only a small season (of eight, 20-30 minute episodes plus a bonus Q&A episode) under its belt, there is a lot of room for character growth that we have yet to see. That shouldn’t dissuade you from listening, but just to set your expectations: a good portion of the early episodes of this season is set-up, but the story really finds its rhythm about halfway through the season and won’t let you go. Plus, it’s been renewed for a second season, so what’s stopping you from listening to the first episode right now?

What I’m trying to say is that the overall quality of The Orbiting Human Circus is top notch. Writing, characters, storytelling, music. Everything. The Orbiting Human Circus is weird and wacky and offbeat, but just like everything Julian does, it’s also seriously unique, it has a whole lot of heart, and it’s undeniably a labor of love. Its sincerity and earnestness struck an immediate chord with me that I still can’t shake–even a month removed from my first listen. It touches the very soul in a lot of complicated ways that I don’t quite know how to explain. It’s just–good. So good. 5/5

I also want to bring attention to some important announcements involving the Orbiting Human Circus. First, a brand new Orbiting Human Circus special called The 2nd Imaginary Symphony will begin airing every other Wednesday starting on May 10th. For some background, Julian Koster created a story album called The 2nd Imaginary Symphony for Cloudmaking that was unofficially released in 2002, a magical tale about a boy named Nigh, his neighbor Mr. Ackerman, and the secret of how clouds are made. I had the privilege of listening to its first iteration, but now it has been updated and polished and is finally seeing an official release and home with Julian’s podcast. It’s so good, y’all. Tune in on Wednesday and fall in love.

And finally, the Orbiting Human Circus and Music Tapes are currently touring all over the United States. I will be attending the show in Portland, OR on May 13th, which I can honestly say I am looking forward to more than anything else this year–and I have 11 live shows scheduled between now and September. If you can, please support Julian, his band, and his podcast. You won’t regret it. The tickets are all very affordable, and they’ve lifted all age restrictions for the venues as far as I know! I will be reporting back on my live concert experience next week, but I already know it’s going to be magical and wonderful–I’m almost literally vibrating with excitement.