I’m back with another book review. This was going to be part of the next installment for my “The Quick and the Queer” short queer-centric book reviews, but in celebration of the March 7 release of Benjamin Sáenz’s new novel The Inexplicable Logic of My Life, I thought I would give a more detailed review. It deserves it. However, I am still planning a third part to my series, so stay tuned!

The Inexplicable Logic of My Life is a YA coming-of-age novel by my beloved Benjamin Sáenz (of the critically acclaimed Aristotle and Dante Discover the Secrets of the Universe, which I reviewed years late here). 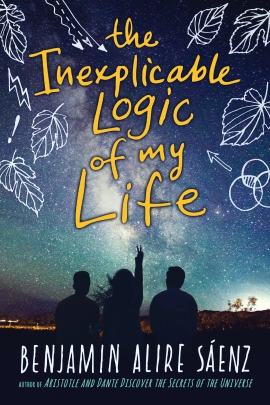 It’s senior year of high school, and seventeen-year-old Salvador (Sal) has a premonition that this year is going to be different. Sure enough, on the first day of school, he hits a fellow student for calling his dad a “faggot.” Two days later, he punches a man in the stomach for calling him a pinche gringo. Sal’s always been known as a “sweet boy,” so this new Sal is different. Scarier. He obsesses over the sudden influx of anger and violence bubbling up from inside him. He starts thinking about his biological father. Was he a violent, angry person? Adopted and raised by a gay Mexican American man named Vicente and a loving and supportive Mexican American family, Sal knows that he’s struck gold; even in his small circle of friends, Sal’s close familial bonds are abnormal: his best friend Sam has a complicated and contentious relationship with her neglectful single mother, while another close friend Fito’s father is absent and his mother and brothers are all lost to their addictions. But Sal still can’t shake the feeling that he’s a product of nature rather than nurture–that blood will eventually overrule all else. Navigating the waters between boyhood and manhood, Sal struggles to make sense of his uncertain future, of his personal history, of his dead mother, of grief, of friendship, and of family.

This book is truly one of a kind. Simply put: Sáenz’s books are an absolute must-read for any and every YA reader. Hell, every adult should be required to read his books. I’m serious. His work is that important. I’ve been super spoiled this year because I read Aristotle and Dante for the first time in January, followed it up with Last Night I Sang to the Monster in late January, and then was treated to The Inexplicable Logic of My Life, a brand new novel from Sáenz, not even two months later. I’ve had Sáenzon my mind for months now, and I can’t get his beautiful words out of my head. Not that I’m complaining. He’s quickly become one of my favorite authors of all-time.

Anyway, on to the review. My thesis: The Inexplicable Logic of My Life is one of the most important books you will read this year. Here are just some of the many reasons why.

1. Positive and varying representation of queer and POC characters. As a fan of Sáenz’s work, it’s so nice to know that reading his YA books will, without a doubt, give me complex, realistic, and diverse characters. He does not disappoint on this front with Inexplicable Logic. In fact, I think this is his most diverse YA book yet, character-wise. I was thrilled to read about a strong, beautiful young woman of color in this book: Sam, a girl who has a love-hate relationship with words and her mother, who is competitive, whip smart, and driven. She may tend to go for the wrong type of guys, and she’s a little loud and on the dramatic side–but hey, you gotta have some flaws, right? Her friendship with Sal is so real, so visceral. It makes me yearn for friendship like what they have. I’ve never read a character quite like her.

Sáenz later introduces Sal’s friend Fito. Shy, gay, and a product of neglect and abuse by his addiction-burdened family, Fito somehow manages to rise above it all. He is bookish, hard-working, street-smart, a beautiful writer, and a kind soul. Using his own words, I think he deserves the descriptor of “cool cat.” He’s determined to get into a good college and seek out a better life for himself. Like Sam, he refuses to be relegated to harmful stereotypes. Sáenz makes sure to develop each character with so much love and consideration that the word stereotype will leave your brain the entire time spent reading his books.

And then you have Vicente, Sal’s Mexican American adoptive father and my absolute favorite character in the novel. Sáenz has always done a fantastic job developing his adult characters that inhabit young adult narratives, but Vicente is hands-down one of the best characters he’s written. I’m convinced that he’s the modern-day Atticus Finch; Sal even compares Vicente to Atticus in-book (“before he was racist,” haha. Did I mention that I love Sam?). The parallels are obvious, but I think Vicente is possibly even more relevant in this day in age. We are allowed to delve into his personal history and his personal life. We watch him resume a romance with a man he never fell out of love with years ago. We watch him step up and care for not just his son Sal, but for Sam and Fito as well. We watch him teach, laugh, smoke, grieve, and finally let himself be cared for. Thinking about him makes my heart feel warm. Vicente is so important to me.

2. Romance taking a backseat to friendship and family in the YA genre. Sing it with me: FRIENDSHIP. BETWEEN. PEOPLE. OF. THE. OPPOSITE. SEX. I don’t know why I was even acutely concerned that Sal and Sam might realize that they have been madly in love with each other romantically for years and start dating. I should’ve known that I was safe in the hands of Benjamin Sáenz. And sure enough, I was. As far as I am aware, Sal and Sam are both straight. They are of the opposite sex. And their relationship is 100% platonic. Let me repeat that. THEIR RELATIONSHIP IS 100% PLATONIC. The only “will they or won’t they?” that happens is from people looking at their relationship from the outside–people who might not know their relationship as intimately as they do. It actually comes up a lot in-book, which reflects the sad reality of our society. It highlights the pressures cast upon young men and women who pursue friendship with members of the opposite sex. But fortunately, Sam and Sal skewer these societal pressures; they know exactly what their relationship is and refuse to consider alternatives. Furthermore, Sáenz avoids yet another troubling pitfall by making it clear that Fito does not develop romantic feelings for Sal either. I’m sick to death of media presenting queer characters who fall in love with people who cannot reciprocate. No need to worry here, folks. Sáenz has you covered. None of that garbage.

The overall lack of romance muddying the lives of the young characters makes room for the development of more important types of love–at least, more important in terms of media representation. We simply don’t see wholesome, healthy friendships like this (especially between members of the opposite sex) nearly as much as we should. It’s normal, it’s healthy, and it’s beautiful. Sáenz is helping normalize these kinds of relationships, and it makes my heart sing.

There is a romantic sub-plot though! But it’s between Vicente and his ex-boyfriend Marcos. My friends… my friends. Let me tell you something. It’s one of my favorite parts of the book. It weaves in so seamlessly with the rest of the narrative. It’s imperfect. It’s gentle, heartbreaking, and cathartic. It’s just right. Kind of like everything else in the book.

I could go on and on about this book, but I’ll end it on a quote from within its pages. Please buy this book. Immerse yourself. Live it. Tell your friends about it. You won’t be sorry. Books are so powerful, and this one lives inside me like a wildfire. It makes me want to actively rise above my own issues–to persist. To learn how to “whistle in the dark.” 5/5

My dad and my uncles and aunts–if there’s one thing they knew how to do, it was laugh. My dad called that sort of behavior whistling in the dark. Well, I guess that when you find yourself in the dark, you might as well whistle. It wasn’t always going to be morning, and darkness would come around again. The sun would rise, and then the sun would set. And there you were in the darkness again. If you didn’t whistle, the quiet and the dark would swallow you up.

The thing is, I didn’t know how to whistle. I guessed I was going to have to learn.