Something that I’ve realized while gushing over the wonderful, healthy love story between Yuri and Victor in Yuri!!! on Ice is just how important good representation of homosexual couples is in anime. It wasn’t until I started talking to friends that it became apparent just how few homosexual couples there are in anime – let alone ones that are portrayed in a healthy, positive way.  A large part of the problem is the practice of queerbaiting, which I touched on previously, but it’s important to address how representation is handled in the anime industry as a whole. 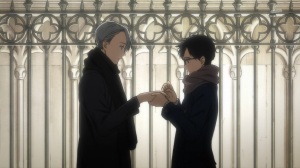 Representation is a large problem in anime because of both the quality and quantity of relationships shown in the media. Rarely is this done in a way that isn’t shaming the characters by having them question their feelings for a same-sex person and wonder if it’s “wrong” to feel that way. Anime can be true to real life, but portraying these questions front and center ostracizes the problem by making it seem normal to question who to love and why, instead of celebrating love and all the forms it can take. At the same time, when anime isn’t trying to present these questions as problems and does try to develop a meaningful homosexual relationship, it often only addresses emotional love at best. Because they do this in such a low-key way, it can prevent the relationship from being more compelling and relatable, causing it to fall flat or even feel unconvincing.

This is why Yuri!!! On Ice is so revolutionary for the future of the anime industry. Not only is it ignoring the questions of who to love and why, but it’s showing the development of a homosexual relationship in a healthy, realistic way that addresses many different forms of love; from sensual to unconditional love, Yuri!!! On Ice isn’t shying away from exploring any these. It’s able to do this so well because of how simple and humble the story is: Yuri and Victor are simply two people who care deeply about one another and want the best for each other, and there’s never a point when that love is questioned or doubted because of genders or labels. It’s a realistic love story under the guise of a sports anime, and this is what allows Yuri!!! On Ice to excel as much as it has. If this quote from the writer of the show herself can’t convince you of everything this show has achieved, then I don’t know what can:

“I don’t care at all about stories about wanting a lover or wanting to get married, and since boy-girl romance stories are a dime a dozen, who cares whether or not if I write one? …I simply want to write a story about a healthy, deeply meaningful relationship…so I don’t feel compelled to have to write about a man-woman pair in that case.”
– Mitsurou Kubo (Twitter August 26, 2016 – 1 month before Yuri!!! On Ice aired) 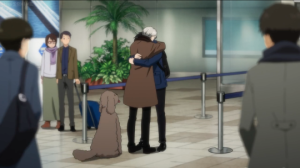 Kubo has written similar Tweets reaffirming this sentiment, but the point is that Yuri!!! On Ice is normalizing homosexual relationships in a country that is largely against it, and by doing so, it’s showing respect to these couples as well. There’s no shame in these characters loving each other because their gender doesn’t matter, and that is such an important lesson in real life as well.  It’s showing a world where all forms of love is accepted without question, an ideal of what our world could be like one day.

With all of this said, I still love couples like Simon and Nia from Gurren Lagann, and I don’t want to suggest that these kinds of couples can’t be written anymore in order to make way for more homosexual couples in anime. What I want to see is more of a balance. Relationships are multi-faceted and complicated, and reducing the complexity to simply men and women relationships is dangerous. Portraying love in all the forms it can take is a much more healthy, realistic approach that can encourage more people to watch anime and enjoy everything it has to offer. Yuri!!! On Ice has done an excellent job of proving this, and I hope that future anime are bold enough to do the same.

One thought on “Yuri!!! On Ice and the Importance of Representation”