Tuesday was the long-awaited Zelda concert in Symphony Hall in Phoenix. We went with family and friends of Chris’ and the experience was absolutely fantastic. The Symphony of the Goddesses came to Phoenix five years ago, and from I heard, it was decent but nothing spectacular. From what I saw on Tuesday, the concert has considerably improved in quality and was completely worth the wait.

We arrived early and had a change to sit and watch the various videos playing on the giant projector above the orchestra before the concert began. Seeing scenes from various games like Majora’s Mask and Wind Waker was really cool, but the best part was when the cameras showed off the various Link cosplayers in the audience.

Before long, the concert began and already did something different from the previous concerts I’ve attended so far. The projector did show footage from the games, as expected, but it also transitioned between the video game scenes to showing the performers in the symphony playing the music. These transitions were done seamlessly and really added to the experience of seeing the performance but also the game footage.

In addition, the concert also featured pre-recorded videos from Shigeru Miyamoto, Eiji Aunoma, and Koji Kondo at various points in the concert. These primarily acted as segways of  the upcoming songs, but also discussing their experiences making the games and the music, which was awesome.

One thing that I thought was improved upon from the Distant Worlds concert was how the video game cutscenes were used in conjunction with the music. These videos took a more narrative approach, often having the music and scenes match in harmony to tell the story of the games but also invoke feelings with the audience as well. 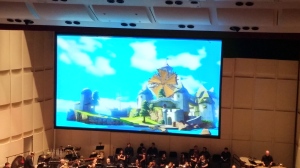 All of the songs performed were fantastic and encompassed the massive music selection of the Zelda series. Many of the songs were the expected choices – the classic, popular songs with the most iconic and nostalgic sound. But there were some selections from more obscure and new games like TriForce Heroes, A Link Between Worlds, and even Phantom Hourglass.

While the conductor didn’t talk at all throughout the concert unfortunately, she did show off the Wind Waker baton to the audience before the Wind Waker medley began, which got huge applause. It’s a shame that there wasn’t much interactivity between her and the audience, but when you’ve been as spoiled by the great Arnie Roth as we have, it’s hard to even come close.

Finally, this concert featured three encore performances – one for Majora’s Mask, one for Dragon Roost Island in Wind Waker, and finally Skyward Sword. It was such a satisfying end to the concert. I would easily go to another Zelda concert again. I was really impressed with the quality of the performances and the videos featured as well.

Video game concerts are becoming more popular over time, and it’s exciting to see more and more of them making their way over to the states. It’s a perfect bridging of two different mediums that were once kept very separate – the professional sophistication of symphony performances, and the nerdy love for video game music from its fans. Together, they’re meshing beautifully, and I hope this trend continues strong for a long time.

One thought on “Zelda: Symphony of the Goddesses Concert Thoughts”