With the announcement of Ace Attorney 6 coming to the states, I’ve been wondering about how the characters will be developed in the aftermath of the amazing game that was Dual Destinies. What adversity will the characters be faced with that will test their morals? It’s something I really look forward to seeing, and yet I found some surprising backlash against the existing character in Dual Destinies, in particular against Apollo and the end result of his emotional journey.

A lot of fans are upset with the way Apollo’s sorrow over Clay’s murder is handled, because as soon as he takes off Clay’s coat, he doesn’t address the murder again, and it’s because of this lack of acknowledgement that fans are upset. Fans feel that he no longer cares because he stops talking about it all the time, but I have to strongly disagree, even though this trend of how character deaths are handled is rather hard to ignore.

I’ve been noticing a trend in shows and games recently. For example, back in season 3 of Arrow (SPOILERS), an important cast member dies, and following this tragic death, an unusual amount of emphasis is placed on the grief of this character. The rest of the cast has many emotional conversations about this individual to keep the memory alive and show that they care. But when shows or video games don’t place emphasis on the character’s discussions of the deceased at every opportunity, it often gets backlash from the fans and is accused of portraying the characters as “not caring”, which shouldn’t be the case.

The Ace Attorney series has some of the most emotionally compelling and excellent character development I’ve seen in gaming. The characters react believably to the situations around them, and it’s largely responsible for my love of the series, and most fans feel the same way. In Dual Destinies, Apollo is dealing with the loss of his best friend, Clay, but is ultimately able to overcome this pain at the climax, symbolized by the moment he removes Clay’s coat. Many fans found this shift too instantaneous and were irritated that there was no mention of the impact of Clay’s death in the Dual Destinies’ conclusion.

However, I find that Apollo’s ability to overcome his grief at his lowest point is an extremely powerful moment in his character development because of its deeper implications. On the surface, Apollo wears Clay’s coat in memory of him, but in reality it is emotionally weighing him down. Throughout the last two cases of the game, Apollo’s doubt and sorrow burdens him no matter how hard he seeks the truth. He becomes obsessed with avenging Clay and is willing to do anything possible to achieve that goal, even if it means accusing Athena and closing himself off from his friends. Clay’s coat is a symbol of Apollo’s self-inflicted burden to avenge him on his own terms.

Despite his best efforts to find the answers on his own, it only makes his doubt and sorrow more apparent. Before long, Apollo reaches his lowest point and struggles with what he should do. He realizes that he can’t overcome his uncertainty of Athena on his own and need’s Phoenix’s help. Once Apollo accepts that his doubts of her were false all along, he can think clearly about what really matters – avenging Clay the right way. This is a powerful moment in Apollo’s development because he learns to openly trust in his friends and himself. He realizes that pushing his friends away was a mistake and that he didn’t have to carry the burden alone.

The important thing about Apollo’s character development is not just the emotional journey, but from what he gained in the end. This character development is prominent in the scene where he removes Clay’s coat and says his signature phrase, “I’m fine”, because it’s true. It doesn’t mean that he’s beyond the grief of losing Clay or that it won’t ever cross his mind again. It doesn’t need to be mentioned again. We, as the audience, know that this pain Apollo is going through won’t go away permanently. We get to take comfort in knowing that, for just this moment, Apollo is “fine” and will do the right thing in honor of his friend’s memory free of doubt and sorrow. 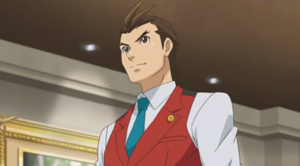 What I think is so great about Apollo’s character development is that he feels and behaves like a real person would. People in the real world don’t talk about their dead loved ones every other day. They don’t need to, because as humans the grief we feel never goes away completely, but we’re still able to cope even without mentioning the person’s death all the time.

It’s something of a problem that I have with current shows should they constantly discuss the death of a character, and part of me wishes they’d handle it the way Dual Destinies does. Show that the character grieves and cares, but don’t drill it into our heads with rehashed, emotional conversations all the time either. It becomes redundant and unnecessary and instead of having significance, it feels like the writers are trying too hard to convey the impact of the sorrow by constantly bringing it up. It makes it seem as though it’s the conversation that matters, and not the underlying emotions.