In anticipation for the new Fire Emblem If game next year, I’ve been trying to experience as much of the series as I can. I started playing one of the older games, Fire Emblem, after hearing that the story and characters were good. While this holds true, this game insanely hard and at times miserable. The limited Support conversations for some characters sucks and the combat in each chapter is extremely unforgiving. I want to like the game a lot, but the difficulty level spiking every couple of chapters is off-putting.

Despite my grievances with the game, the thing that kept me plowing through its misery was the characters. Almost every character is likable despite their limited character development due to the limited Support conversations for each character. The characters were motivation enough to progress the story quickly just to meet and recruit them. Since most of the characters don’t have as many Support conversations and opportunities to grow as those in Awakening, I picked my favorites this time around based on their character design and distinguishing traits. A lot of the characters didn’t survive my play-through of Fire Emblem, but these were the lucky ones who did and left an impression on me.

Yet another thief makes the cut as one of my favorites in Fire Emblem. His relationship with Leila was tragically short-lived but still developed enough to garner sympathy from the player as well. His real occupation as a spy was invaluable to the narrative, and the resolve he gained to finish Leila’s mission was compelling and a climactic moment in his development. 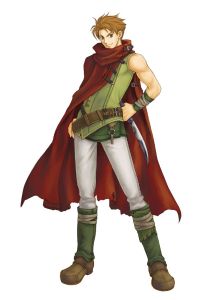 Lyndis – often called Lyn for short – is an interesting character notably through her refusal to lie. She always speaks her mind and her honesty makes her a transparent yet sympathetic, despite her predictability. She doesn’t take nonsense from anyone, making for some entertaining bits of dialogue involving her impatience for anything anyone else is saying (looking at you, Sain). Her relationship with her grandfather is one of the better aspects of the game since he’s her only family following the eradication of her tribe. Her banter with Hector and the other characters is entertaining as well and contributes to her character. Lyndis is strong and fights for others, making her a great addition to Eliwood and Hector’s stories.

Eliwood, the main character of the core story following Lyndis’ prologue, is the standard noble prince character. He fights for the common good even though he’d rather not have to fight at all. He always searches for peaceful alternatives, giving him a different, more understanding perspective unlike Hector. His search for his missing father was a personal and compelling mission, and when it became a much larger conflict he handled it in a believable way, gaining the resolve to finish what his father started and being a worthy protagonist.

As soon as Raven is introduced, it’s clear that he has his own agenda but is still considerate of his allies. His revenge story against House Ostia is interesting, and though he doesn’t follow through with it, the foundation is still compelling and justified. He acts cold-hearted and distant but becomes more kind and considerate to his sister Priscilla and other allies in the group as well. Raven’s character arc makes him one of the more developed and interesting characters in the game outside of the core, main characters, and for that he earns the number two spot on the list. 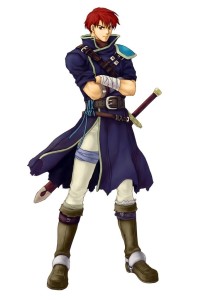 Fire Emblem’s equivalent to Severa from Awakening, Serra has a spoiled and bratty attitude on the surface that often irritates many of her comrades. However, her attention-seeking and loud demeanor is the result of her misfortunes as a child, and for that it’s hard not to sympathize with her. She’s brutally honest, saying anything that comes to her mind regardless of anyone else’s feelings. I was entertained by her stubborn, somewhat selfish personality and thought it was a welcome change from the majority of the party members. Serra was a character who, no matter what, I refused to let die in combat, using various items on her to boost her stats and keep her safe from the jaws of death every chapter. Since she was my number one priority and my motivation for completing the game, it only makes sense that she’d rise to the top of the list as my favorite character in Fire Emblem.