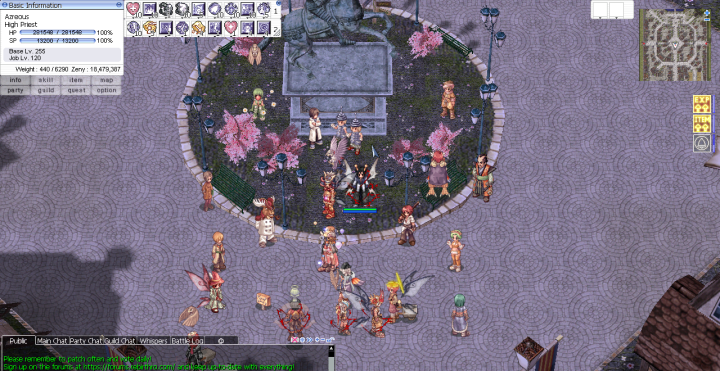 So this probably feels like cheating, especially after we blurred the lines last time by featuring music from Steins;Gate. That music was legitimately in the game, though, so you’re probably wondering, “What the hell is the video game connection?”

That’s a fair question. Allow me to take you a decade into the past.

Back when I was in college, I got into the MMORPG Ragnarok Online through some friends on a forum that I admined at the time. If you’re not familiar with RO, it’s a Korean-based game with colorful 2D sprites and a ton of private, customized servers in addition to the main one. Those servers were what attracted a lot of players who might not otherwise have been interested — it meant everything from class skills to NPCs to character designs to…background music.

The main town in Ragnarok Online is Prontera. It’s a city where everyone congregates, from characters searching for basic services to vendors opening up shops (though those were later disallowed because it flooded the streets with too many people) to those who simply wanted to sit and chat in between quests. Back in 2005 when I started to play this with Nick and Mike and other friends of the show, the music for Prontera was set to this song.

I hadn’t seen Fullmetal Alchemist at the time, nor had I played on other RO servers to know that this wasn’t the default music. I just thought it was awesome. It didn’t matter that the choir was singing in Russian; the sweeping orchestal tones and the build from soft and quiet to bombastic got me every time. There were times when we would just sit in town to hear the music play once or twice.

Only years later, when I watched FMA in 2009 or 2010, did I discover the source. By then, I had an indelible connection with this from the game, which is frequently how I remember VGM themes — from the moments in which they play. Seeing it used with virtually every sad moment in FMA (and boy, were there a few of those!) was just the icing on the cake.

Music to My Ears covers soundtracks or individual songs from video games. You can view all posts in the series by clicking here.