Just as before, here’s a list of what I’ve been able to watch as of late, and the scores based on my experience with each show and whether or not I would recommend them.

Code Geass (R1): 5/10
The dynamic of Lelouch disguising himself as Zero was interesting, but poorly handled. So much of the show focused on Lelouch and his high school friends, rather than on the more interesting plot with Zero and the rebellion against Britannica. I’m a sucker for character development, but it was not done particularly well here. The only character who had some kind development was Suzaku, and even then, it was through the annoying, meaningless adventures in high school (like chasing the cat to be accepted by everyone? Come on, there’s a better way to do that). Another thing, and I know this is bad form, but I was not a fan of the animation. I wish I was one of those people who couldn’t notice the difference in art style in shows, but unfortunately, I have a strong eye for it. The character anatomies are equivalent to sticks, and the faces and eyes – especially the eyes – are creepy. It’s a distinct style, but it weirded me out to no end. The show was smart, but the overemphasis on the love triangle(s) and fan service was at times frustrating for me, when all I wanted was for it to be like Death Note with mechas. I found that while there were certainly moments of the show that I enjoyed, there was never a moment when the show went above and beyond my expectations and was really great. I was prepared to accept the ending of R1, but after finding out there was an R2, I was disappointed and didn’t have the will to watch anymore of the show. The story with the rebellion would absolutely need to take priority in the second season in order to get me to watch it, but after waiting for that to happen in the twenty-five episodes of the first season, I doubt it’ll happen.

Persona 4 The Animation: 7.5/10
Persona 4 was pretty entertaining. The character designs are diverse, and their personalities are unique and likeable. One of the complaints I have with the show is the formula. Yeah, yeah, I realize it’s fundamental to the show, but that doesn’t mean it doesn’t get redundant. Here it is: Character enters TV. Character faces Shadowself. Character defeats Shadowself by accepting them as a part of them self…And that’s it. It’s character development, yeah, but it’s done in a very formulaic way, and I wasn’t a huge fan of it. Why couldn’t the revelation be different for each character, instead of them all accepting it? Why does that have to be the lesson for every person? It was fine the first couple of times, but it gets redundant quick due to the ensemble cast of main characters. I’m sure this set-up works a lot better in a video game than it would for an anime, but it would have been cool for some diversity. Another thing; the characters don’t fight. Yeah, I know, it doesn’t make sense for them to have weapons on school grounds…But if they got away with it in the game, why can’t they get away with it in the show too? It makes the action feel very one-sided, with a lot of standing around. You don’t really feel a sense of empathy for the characters being threatened or anything because they’re just standing there letting their Personas do all the work! It’s a total letdown that I feel could have been avoided. But now on to the more positive notes! The show is definitely a fun watch, mostly due to the story and character interactions. The mystery is fun and intriguing, and the twist that the killing isn’t over only adds the desire to figure out what’s really going on. The finale was pretty serious and large in scale, though I think I would have liked the possibility of the story being larger to be introduced earlier on. The show has a lot of comedy, but the plot has its share of serious moments too, so they balance each other nicely. Overall, Persona 4 The Animation is pretty good despite its issues. Let’s hope that the Persona 3 movies fire on all cylinders.

Noragami (Season 1): 8/10
The interactions between Yato, Hiyori, and Yukine are both entertaining and compelling. The show is driven by Yato’s goal to become a god with his own shrine. It seems like a selfish goal, but the way Yato is written, it doesn’t feel selfish. Sure, he fantasizes about it, but who wouldn’t fantasize about achieving their dream? I especially enjoyed the character development Yukine received in the latter half of the show; it was intense, riveting and very well done. The animation in Noragami is crisp and colorful, and the fight scenes are solid, but I can’t help but think that the enemies should have been more threatening looking…I mean, when one of the main characters undergoes a transformation that’s horrific in comparison as a personification of the negative things he’s done, that can’t be a good sign. There is a case of amnesia in the show, but it managed to be cleverly incorporated into the story and history of the characters and served as the perfect justification for including an otherwise useless, cliché twist. The finale had some of the better action scenes in the series, though I would have liked it better if the villain in those last few episodes was introduced earlier. He shows up out of nowhere with no explanation, and he was actually a fairly interesting villain, but I wish he had been introduced earlier on in the show. It’s disappointing to me that this show is only 12 episodes long, but I hope that they’ll continue to release sequel seasons more regularly as a result of them being so short, so if that happens then I’m okay with it.

Steins;Gate: 10/10
Steins;Gate is the most confusing show I’ve seen since Death Note. With that said, it does a great job of explaining every plot point to tell a cohesive, meaningful story. The emphasis on an overall female cast was an interesting choice that I thought would certainly flop, but each character is distinct and memorable. I was surprised at how dull and washed out most of the colors are, but it actually fits the story and setting quite nicely. This show is definitely one of the best English dubs I’ve watched, and every character moment is handled in believable way that can be related to. The beginning of the show has a somewhat slow start, but it’s a necessary foundation to the characters and the story. Quite frankly, I was not expecting this show to take the sharp turn that it did, and even though it kind of comes out of nowhere, the aftermath is too compelling and intense to miss. All of the pieces in Steins;Gate align perfectly, and it’s a really great show for anime fans who don’t need a ton of action or fantasy elements in order to enjoy a show. 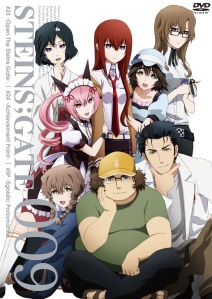 Note: I attempted to watch Fairy Tail and couldn’t finish the first episode. Where’s the intrigue or meaningful character interactions? Instead, all I get is stupid “Salamander” wooing women, the main character (whose name I don’t remember – did they even say what it was?) eating a bunch of food in the overly comical exaggerated way, and all the while I’m left wondering what the overall point of this show is going to be. I get that Fairy Tail is a comedy, but I wasn’t laughing. The cat was creepy, the characters didn’t have any particularly likeable qualities to latch onto, and the animation made me want to cry. Maybe I’m being too critical, but if I don’t have the patience to get through the first episode because I can’t see any potential in it, there’s a serious problem.

I’m working on getting through my ever-expanding list of shows to watch, and if you have suggestions or thoughts on the scores above, let me know in the comments!