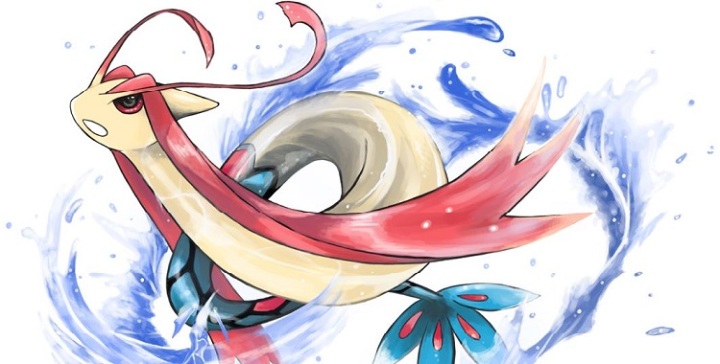 This is At the Buzzer’s list of the top 25 Pokemon of all-time. Today we reveal our panel’s No. 1 Pokemon at the culmination of a month of build-up. For more information, click here or check out the Related Links down at the bottom of the post. Don’t forget to vote on how we did in the poll below!

Today’s Pokemon is said to live at the bottom of large lakes. Considered to be the most beautiful of all Pokémon, it has been depicted in paintings and statues. When this Pokémon’s body glows a vivid pink, it releases a pulsing wave of energy that brings soothing calm to restless spirits. Its lovely scales are described as rainbow colored. They change color depending on the viewing angle.

Shaun: Well, it’s been a long road, and we had to cut through a bunch of second rate Poke-stiffs to reach this point. But at long last, we’ve reached the number one Pokemon ever. Ladies and gentleman, Milotic.

Milotic is probably one of the most aesthetically pleasing Pokemon in the entire series, but it’s also pretty beefy. You’d assume a Pokemon that could be characterized as “pretty” would be no more than glass cannon at most, but Milotic is more than capable of handling itself. And while the variety and dynamism of its moveset leaves something to be desired, I prefer to think of Milotic as a specialist – it doesn’t need to be a jack of all trades to kill you. What it does, it does very well.

My own personal experience with Milotic was a bit of an arduous journey. In Ruby/Sapphire, I first witnessed the majesty that was Milotic, and I wanted one. It had been a long time since there was a water pokemon that resonated with me so strongly…probably because 95 percent of water pokemon are boring and/or terrible.

However, Game Freak must have known Milotic would be a popular choice, because they made it damn near impossible to catch the pre-evolution form, Feebas. I’m sure Chris will chronicle just how frustratingly inane trying to catch one of these things was, and I came up short every time. It didn’t help that Feebas was little stronger than a doormat and also ugly as sin.

In the end, though it was all worth it. I took Milotic with me to level 99, and my Milotic (named Madam, because she was a lady) played a pivotal role on one of my favorite teams ever assembled (which also included the god that is Metagross). Milotic helped make Ruby/Sapphire one of my favorite generations of Pokemon, and for that, she deserves all the respect.

Milotic’s popularity and appeal is undeniable, but what’s cool is how it manages to appeal to a lot of different people for a lot of different reasons, as evidenced by our voting panel. I don’t know what more you could ask for from a number one.

Long live Madam Milotic, At The Buzzer’s number one best Pokemon of all time.

What if I told you that even if you managed to get your hands on one of these suckers, its evolution might have been even more complicated?

…What if I told you that in Generation IV, those random tiles went from six to four?

Yeah, Feebas was a real pain in the ass. Suffice to say I didn’t have one that I caught on my own. I hacked that son of a bitch, and I have no remorse. Luckily, Game Freak finally took pity on us poor regular folk in Gen V and made both catching and evolving Feebas much easier.

What’s that? This is about Milotic? Oh, sorry.

Once you labored through that terrible process (or did a trade on the GTS or something), you could finally get to Milotic. What a beast. As Shaun mentioned, it manages to combine both beauty and strength.

A base stat total of 540 puts it close to some of the best non-legendaries, especially when you ignore a low ATK stat it doesn’t need. Its SDEF and HP make it especially tanky, and although its DEF is mediocre, its Marvel Scale ability raises defense by 50% if Milotic has a status effect — including when it uses Rest. And Gen VI added the Competitive ability, which raises SATK two stages whenever an opponent lowers its stats, including SATK itself. Needless to say, Milotic is stacked.

I carried a Milotic on my team through most of Gen IV, and I thought it was cool that Cynthia used one as well. There was just one problem: Milotic’s move pool sucks. We’re talking Flareon-level bad here. If you ever feel like making yourself angry one day, go into battle with another tanky Water type and watch the rage unfold. I was carrying a moveset of Surf/Ice Beam/Aqua Ring/Rest at one point with Leftovers as an item, and I got caught in a battle against some other annoying thing (Slowbro, maybe?) where neither one of us could do any damage and we kept healing back what little hurt we could dish out. I think it lasted 25 minutes before Struggle kicked in, and even then no one could die for a while. SAD MEMORIES.

The point is, Milotic doesn’t learn a whole lot. STAB Surf or Hydro Pump? Cool! Ice Beam? Great! Annnnnnnnnd…Twister? Um…Toxic? If Milotic could just learn Thunderbolt or something, we would be best friends to this day.

My love affair with that tender serpent may have faded a bit over time, but I still love the design and the tankiness and everything we fawned over already. So I’m actually pretty happy that Milotic ended up as our No. 1, even though I had it pretty low on my own list. If 70% of the panel likes it, I like it too.

Nick: Based on how my own list was, I can say that apparently my favorite new-Pokemon generation was Ruby/Sapphire/Emerald.

Back then, the idea of Milotic intrigued me. I always figured I’d find a time to train one up but then I looked at what would be required to get one. Originally, the difficulty in getting your hands on one of these was the second-hardest thing to do in Pokemon, the first being completing your Pokedex on top of catching one. For those who don’t know, there were a random six water tiles which could spawn a Feebas along Route 119 in Hoenn. Preliminary research shows that nobody has actually published the number of water tiles on that route but some counts go higher than 250. So each time you fish a tile, you have less than a 3% chance of finding one that will even spawn a Feebas, and even if you do it isn’t guaranteed – you might get one of the other Pokemon found along the route. Even after you catch one, it was still difficult to evolve it!

It has since gotten a lot easier to find and evolve, with being able to trade around the globe, but I still have not been able to convince myself to get one. Milotic still made my list, though. Probably out of admiration of those who actually did the work.

Jason: See now, Milotic I can understand. Would I have put it this high on the list? No. But it’s a Pokemon that possess both power AND beauty. With a serpentine grace and a colorful tail, it’s easy to see why everyone in the Pokemon world considers it the most beautiful. Plus I really like the fact that it evolves from such an ugly fish. It sort of mirrors the Magikarp evolution, only Feebas isn’t anywhere near as useless as the Karp himself.

Michaela: Milotic has a lot more accessibility in the recent games, so the idea of owning one isn’t complete blasphemy anymore. It’s a very elegant and powerful Water-type.