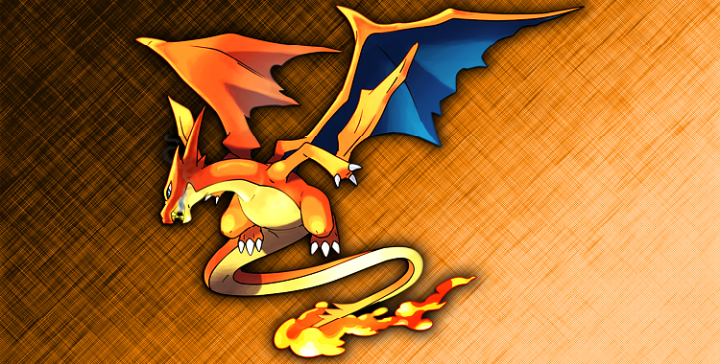 This is At the Buzzer’s list of the top 25 Pokemon of all-time. We’re in the serious business zone now, counting down one by one until we reach the very best. For more information, click here or check out the Related Links down at the bottom of the post. Don’t forget to vote on how we did in the poll below!

Today’s Pokemon flies around the sky in search of powerful opponents. It breathes fire of such great heat that it melts anything. However, it never turns its fiery breath on any opponent weaker than itself. When expelling a blast of superhot fire, the red flame at the tip of its tail burns more intensely.

Chris: There are a lot of reasons to like Charizard, but let’s get one out of the way right now. Anybody who is familiar with Charizard probably doesn’t need me to even say it.

So Ash, as usual, is struggling against Blaine. Ninetails destroys Squirtle with a single Fire Spin. Charizard refuses to fight, and goes off to the sidelines to chillax. Despite managing to hit a Rhydon with an electric attack (aim for the horn! sigh), Pikachu is already winded by the time Blaine sends out his final Pokemon, Magmar. Magmar’s attacks are so fierce that Pikachu is about to fall into the volcano’s lava before Ash finally forfeits. But still, Charizard’s interest was piqued.

You know what happens in the rematch. The two fire titans go at it, destroying platforms and ignoring the lava. Eventually, Charizard decides that it’s time to end things, so he Seismic Tosses Magmar into oblivion. Anyone who wasn’t all aboard the Charizard train when that happened was kidding themselves.

Charizard is still one of my favorite first-gen Pokemon. He gets a ridiculously cool looking black coat of paint in his shiny form. He gets not one but two Mega evolutions, one of which is seen above. And although his 4x Rock weakness and only above-average stats are issues, who cares. He threw Magmar straight to hell. That’s good enough for me.

Shaun: I’m horrible at making decisions. Like seriously bad, anyone can tell you. Even if the choices don’t matter, and are relatively easy, I will deliberate for hours–even days–and never quite feel good about my decision.

Well, I’m happy to say that, as I geared up to start my Pokemon journey in Red/Blue, the choice of my started was a no brainer thanks to Charizard.

I mean, just LOOK AT HIM. A red, fierce looking fire dragon with a flame burning on his tail? My goodness. In fact, we love the guy so much that he’s the reason Chris and I chose to start with a Charmander in our Game On of Pokemon FireRed. His name is Dragonface. Very creative. Look for him.

Normally, I’m a little disappointed when my first form Pokemon evolve, because I think it’s too fast and feel like I didn’t even get to enjoy it. Not the case with Charmander or Charmeleon. Nope, I wanted those deadbeats to hurry the hell up so I could have my own Charizard.

Who, as a kid, didn’t wish they had their own Charizard that they could cruise around the skies with? And, while cruising, visit the homes of children who were mean to them and light them ablaze. The house, I mean. But also the mean children. But Chrarizard’s fire doesn’t affect the owner because they burn with the same burning desire for vengeance. Who didn’t have exactly that same wish?

And then, when I thought he couldn’t get any cooler, the incident in the anime with Blaine that Chris talked about happened, and that was all she wrote. Charizard was officially one of my favorite Pokemon of all time.

Jason: Honestly? Charizard is over-hyped. I mean, it wasn’t even until Pokemon X that this “dragon” was even actually a dragon. That being said, do you remember the time Ash’s Charizard seismic tossed that Magmar from the atmosphere? Yeah. Pure, unfiltered epicness…