A couple of weeks ago I mentioned that I got a new update on my 3DS that introduced four new games at the Mii Plaza.  I also mentioned that the one I wanted to play, Mii Force, had not been able to be downloaded due to the download quitting around 65%.  Turns out this is an issue with my modem or router, and I have no idea what to do.  However, since I do have a smartphone that is capable of tethering objects like a WIFI hotspot, and I had a little excess data left over at the end of the cycle, I used that to finally download the game.

Based on previews, the game reminded me a lot of old arcade vertical scrolling shooters that I used to waste my quarters on.  There were a few arcade games that I truly enjoyed playing, but I think everyone will agree with me that there is at least one type of arcade game that you’d run through an entire $10 roll of quarters just to beat if you had to – vertical scrolling shooters is that genre for me.  That is why I was looking forward to playing this particular upgrade to the Mii Plaza the most. 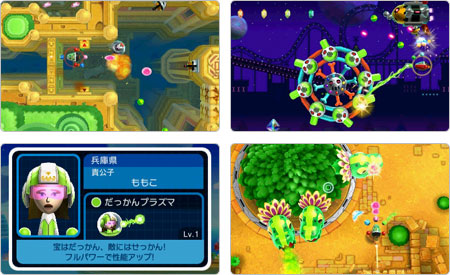 I was surprised to find out that not only does the game do vertical scrolling, but also side scrolling, bottom scrolling, and enemies are constantly coming in at different directions.  So what is a player to do in these circumstances, when you can only shoot in one direction?

As it turns out, you can shoot in several directions – any one of 8 directions, to be precise.  Without the invincibility powerup, your ship is capable of firing in up to 4 directions at the same time: three cannons spread in front, and one to the rear.  These cannons can be rotated to the cardinal directions (up, down, etc.) or any of the directions in between.  As you may have already guessed, this is how StreetPass comes into play.  You start with one of up to 10 friends already in your craft, and the rest you rescue along the course of a given mission.  The math isn’t adding up, you say?  10 friends and only 4 guns?  Additional friends are used to “upgrade” one of your weapons; two or more friends in a given cannon direction will give you a level 2 or higher weapon in that direction.

I’ve played the game on quite a few levels now, and I always find myself a bit disheartened after I discover that I didn’t find everything in the mission (heck, on one particular mission I happened to miss one of my friends!).  There is, at times, a lot to focus on in the screen and it is easy to miss something.  When I say there is a lot going on, don’t interpret that as the game is difficult.  Only once have I not completed the mission, and that was my own fault.  The game gives you another chance to finish the mission, and taking the opportunity, this time I finished without taking a single hit.

The major downside to this game is that it generally doesn’t satisfy my craving.  I can get up to 10 credits a day, which is good for 5 mercenaries.  I can spread those mercenaries out over several missions and make any given mission harder, or I can play one mission at 5 mercenaries.  A day.  This is a far stride from loading my quarters into a machine until the game is done.  Maybe someday, I’ll go to Japan where StreetPass actually matters…  I hate waiting.

He can be contacted at mail@atthebuzzershow.com. View all posts by Nick